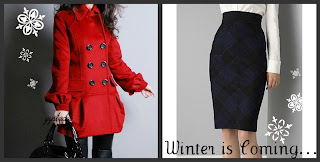 As I have just recently said goodbye to the very last drops of summer and embraced the cool, crisp autumn weather that I had been so effectively ignoring, it was quite surprising when Bangor experienced a FREAK SNOW STORM just over a week ago.  That's right folks, we here in Maine managed to survive 5 whole months of above freezing weather before we were reminded that we live in the ARCTIC TUNDRA.  That crazy OCTOBER storm, that canceled events and got the plow trucks out for their first run of the season,  left a definite chill in the air that is here to stay.   I guess it's a good thing I really like winter.  In order to continue loving winter, despite the many excessively chilly and sometimes overcast days, I have attempted to develop cold weather dressing into some what of an ART FORM.  Now, I understand that many people don't mind putting on a giant puff jacket that makes them look like a marshmallow and wearing head to toe wool.  I have no problem with that, "To Each His Own."  However, because I need to stay SANE and warm, adorable winter outfits are at the top of my priority list.  Although I hate to jump the gun and talk about winter fashion before the weather is simply too frigid to continue wearing flip flops, I though I might make an exception just this once.  So, as a preparatory measure to ensure the happiness and good mental health of those living in the Northern Hemisphere, I have compiled some "Fall to Winter" Fashion Finds that are sure to come in handy as the air gets, inevitably, chillier. 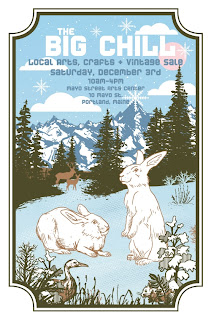 Speaking of the chill in the air, I am REALLY looking forward to being part of a couple more Maine craft fairs during this fall/winter season, including.... THE BIG CHILL!!!  THE BIG CHILL is a follow up fair to THE BIG THAW that I did last April as my very first craft fair EVER.  I'd like to think that I have learned a lot about craft fairs since then: what to sell, what to expect, how not to dress, and other vital facts.  I'm sure somehow I'll still show up to THE BIG CHILL in fashionable, yet completely weather inappropriate clothing/accessories in some way.  That's just how I roll, unfortunately.  Impractical clothing aside, I am REALLY looking forward to reuniting with my fellow crafters and artisans on December 3rd at the Mayo Street Arts Center in Portland.  So...if you live in Portland, Maine, or if you're up for a day trip, come visit!  It'll be really fun!  :)  Especially if I trip over my 5 inch heels and fall on my face like last time.  :) 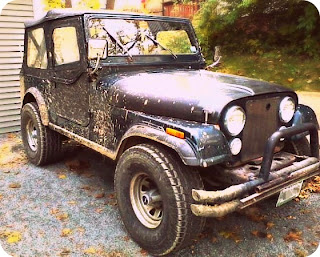 ANYWAY, as a way of saying goodbye to Summer/Fall weather, Mateo, my hubby, and I decided to take out our 30 year old Jeep OFF-ROADING, while the ground was still soft enough to totally cover it with mud.  AND THEN... we decided to invite my parents to come with us!  I think it's safe to say that my parents are not exactly the dare-devil type.  I so wish I had a picture of my mother's face as we splashed through mud puddles, climbed up steep, rocky hills, and scraped against countless branches and rocks in our rugged little Jeep. Mom and I ended up giggling loudly and uncontrollably every time we were thrown around and splattered with mud in the back seat, as we clung on to the 30 year old upholstery for dear life. It was utterly hilarious.  My husband had such a great time that afterward, he had me take all kinds of pictures of his Jeep covered in mud.  He also kept asking, "Are you going to blog about this?  There are hardly words for how adorable I think that is.  :) 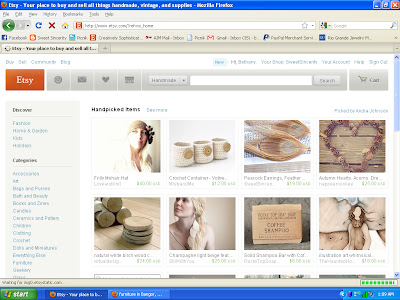 Another cool thing that happened since my last blog post was that I was on Etsy's front page again, but this time FOR REAL!!!!  Not to say that the last time wasn't for real too.  But this time my earrings were featured in such a prominent spot that everyone could see them just as soon as they logged onto Etsy!  It's a freak coincidence that I even saw this treasury because it  was on the front page at like 2am.  I am not normally awake at this time, but for whatever reason that night I couldn't sleep.  So, I got up and turned on the computer, only to see this glorious sight!  HOORAY!  I got lots of emails and a few big sales out of this fantastic exposure.  Basically, it was pure awesome.

With regard to other fields of awesomeness, I realized that it's getting close to my one year Etsy-versary.  Although I technically set up my online shop in December of 2009, I didn't really do much of anything with it till October 2010.  I sold my first item November 15th, 2010.  Now it's almost a year later and I've hit over 150 online sales, I done so many craft fairs I feel like a veteran, and I have my jewelry on display in an art gallery!  It 's so great to see how the business has grown and changed in just one year.  It feels like I've been making jewelry forever, and it's so hard to believe that it's only been a year since this crazy little adventure started to take shape.  I just wanted to say a huge THANK YOU to everyone who has encouraged and supported me during this wild ride.  If I were to write a memoir about all my experiences in the past year, it would most definitely be called:  "Running With Scissors:  how to do really stupid things and somehow come out with both your eyes and all of your extremities." Okay, I guess the title needs a little work.  The probability of me actually writing a memoir anytime soon is pretty slim, so I guess I have the time to work on it!  ;)
Email Post