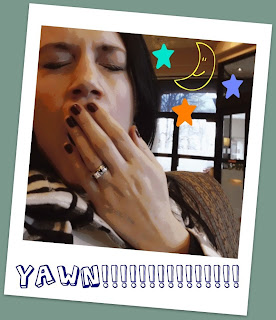 Ahhhhh.....(long sigh) I seem to finally be getting over the post-first-craft-fair a coma (which I like to refer to as THE BIG SNOOZE) that I have been in since our very first craft fair, THE BIG THAW in Portland, Maine.  I am surprise how long it's taken me to recover from the craft fair frenzy!  I am ashamed to admit that I've been in an unmotivated slump for more than a week now!  But then again, working 24/7 for seven days straight, culminating in a exciting/nerve wracking FIRST CRAFT FAIR EVER can really take it out of you...  My poor sister came over to work the other day and said, "I hate to say it, but I AM BURNT OUT!"  That was her polite way of saying, "Don't make me look at another sliver of sterling silver wire, or I might SNAP!!!"  LOL!  We certainly pushed ourselves to fill out our inventory and prepare for the event.  Hopefully this week we will regain our momentum (perhaps motivated by the stinging guilt of being such slackers) and start being more productive! 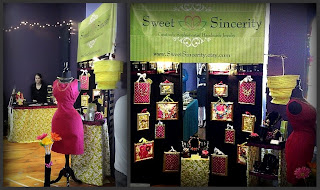 So, speaking of THE BIG THAW, a lot of people have been asking how our first craft fair went!  Here are a few pictures of our display!  It came together so well-and the greatest part is that it was so inexpensive... Did I mention my extreme love and affection for the dollar store? :)  All in all I think that we did pretty well.  From a primarily monetary standpoint, I was initially disappointed that we didn't make the millions of dollars that I had planned on.  Of course, this was my first craft fair and I had ABSOLUTELY NO IDEA what to expect.  We more than covered the cost of the our entry fee, and after talking to my metalsmithing teacher who has WAY MORE experience in these type of things, I guess I did pretty well for my first craft show!  Plus I learned a lot about what to expect at a craft fair, who really is Sweet Sincerity's target demographic, which items sell the best in person versus online, and which price ranges seem most popular.  Oh, and we met some fantastic artisans, including the fantastic people behind andraswhismies, edenbody, makingsofshannatice, allsey, bybethany, handmedowndesigns, the incomparable Audrey from littleeyedesigns who organized the event (thanks Aud,you're amazing!), judyb, quenchmetalworks, lindybythesea, and so many more!  Forgive me if I forgot anyone...like I said, still coming out of the coma :) 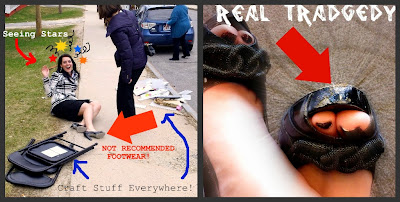 One of the very important pearls of wisdom that I procured from my very first craft fair is that it is a REALLY BAD IDEA to wear really tall heels there.  Sure, I looked really nice...but there is a reason why no ones else really wears 5 inch heels while trying to lug heavy things and set up their booth.  Why you may ask?  I share the following photo with you to illustrate the frightful consequences of transporting an overloaded armful of craft fair supplies down a hill in ridiculously high heels.  May the Crafter be warned... :)

﻿﻿
﻿So now, I've gotta figure out what the next big event will be!  I already applied for two more local Bangor shows in JULY/AUGUST we'll see how those go.   I will certainly let everyone know when/if I am accepted to these craft fairs.  I think it'll be nice to do a local show, especially now that we have our displays and everything already figured out!  Can you say LESS STRESS, PLEASE? :)
Sweet Sincerity

In other news, the Item of the Day event has been postponed till next month, because I'm just so darn tired.  Oh yeah, and because we are running a 20% off offer in our shop ON YOUR ENTIRE ORDER til the end of the month!  Just visit our Facebook page for the coupon code! :)
And last but not least, feast your eyes on the latest fantastical treasury collections that Sweet Sincerity has had the honor of being chosen for!  More updates to come. :)